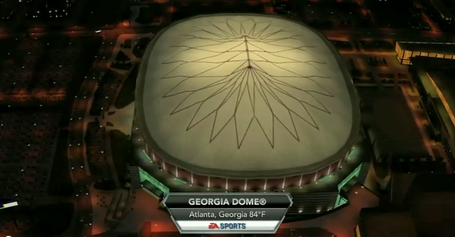 We're getting a good sense of what EA Sports thinks of the Atlanta Falcons, but now let's take a look at how the team operates in Madden 12. This is so important. Via Pasta Padre, here are two videos showing pregame festivities before a home game against the Philadelphia Eagles, which include a shot of the Georgia Dome and player intros, and two quarters of actual gameplay.

The two videos, and then some notes:

I love the idea of MATTY ICE MATT RYAN stunting harder than Roddy White during introductions. Sean Weatherspoon is a pretty good pre-game hollering choice. I wonder if there's a player rating for that.

Music seems about right: wrestling rock and stuff that sort of sounds like T-Pain but is probably by somebody else.

Michael Turner catches multiple passes in one half of football. I take back everything I said about realistic, you guys.