Atlanta Falcons wide receiver Roddy White is among the handful of Reebok-aligned NFL players wearing star-spangled shoes for Sunday, which happens to be the 10th anniversary of September 11. White's bookend, rookie Julio Jones, is also wearing 9/11 tribute gear, with Under Armour supplying cleats bearing the names of the New York City Police Department and and New York City Fire Department. 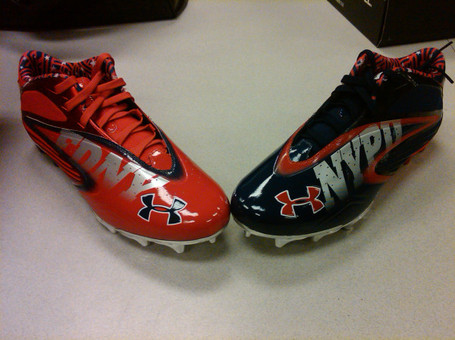 Hard to find fault with either, and it's nice that these are in team colors. The red, white and blue Reeboks certainly look better, but I'm not going to complain about seeing either White or Jones score a touchdown in these.

Complain about equipment corporations holding competing 9/11 memorials if you like, but this is something many players have said they believe in. At one point, a few were willing to be fined by the NFL for wearing non-standard apparel, but the league wisely allowed it.