Atlanta Falcons cornerback Dunta Robinson has a bad helmet, and for some reason it shows up when he's playing against the Philadelphia Eagles. While his hit last year on DeSean Jackson was overblown, the helmet-first hit he put on Jeremy Maclin in Sunday night's game will result in a very merited fine.

Here's the moment of impact, via @bubbaprog: 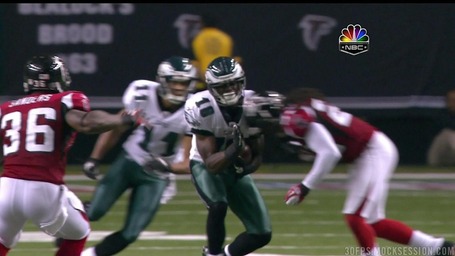 As a repeat offender, Robinson stands to be suspended for this one. He'll certainly be punished, especially with how instantly and repeatedly NBC pounced on him for the shot.

It's a dangerous tackle and a reckless way to play football, but it's also simply a poor attempt to bring down a ball-carrier. Arms are important, as is seeing what you hit.