Update: It's being called a neck injury.

The Atlanta Falcons defense has had one primary objective in this game: hit Michael Vick. He's been hit a lot, and one of those pops knocked him out of the game late in the third quarter. A blitzing William Moore slung Vick face-first into an Eagles offensive lineman. He stood on the sidelines and watched a few plays before being taken to the Georgia Dome locker room.

On the way out, he pointed to the scoreboard in response to booing Falcons fans, the second time he's gestured with his fingers at Atlanta's fans during his NFL career (via @bubbaprog): 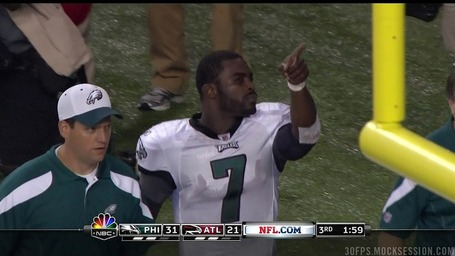 With backup Vince Young out for the game, this means third-stringer Mike Kafka is now in charge of Philly's offense. He's good at handing the ball off to LeSean McCoy and drawing iffy roughing the passer calls.

Vick was spotted by NBC's cameras spitting blood as he walked to the sidelines. It's definitely some sort of injury to his head or neck, with some speculating it's a concussion.