The past few days have been extraordinarily busy ones for the Atlanta Falcons.

As free agency is finally starting to move into high gear (the new league year officially begin at 4:00 PM on March 13), the Falcons have already worked out some key in-house contract extensions (Thomas DeCoud and Kroy Biermann) along with franchise tagging CB Brent Grimes.

But if any of the rumors currently swirling around the media hold some truth, the Falcons are far from finished in free agency. Prepare yourself, because there are many...

First, the updated free agency spreadsheet (I love this thing): 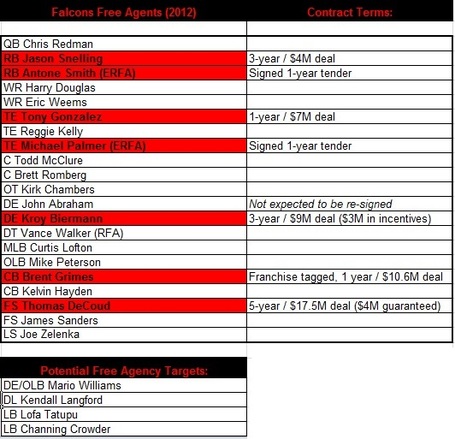 Falcons Sign OG Vince Manuwai
Jay Glazer reports that the Falcons have agreed to terms with the ex-Jaguars(!) lineman.

While terms of the contract have not yet been released, I can promise you it's nothing extravagant. Manuwai spent the entire 2011 season out of football, and before that his healthy has almost always been a major concern.

Still, most would certainly call this a bargain-bin signing. He's always been a talented run-blocker, and given the gaping hole at right guard (eww, Garrett Reynolds) this is a nice low-risk, high upside move for the Falcons.

Mario Williams To The ATL?
According to Jason La Canfora of the NFL Network, the Falcons are expected to make a "strong play" for the marquee free agent defensive end. With John Abraham almost certainly being let go this offseason, the Falcons obviously need a big-time pass rusher.

The drawback is that signing Williams could become very expensive, very quickly. Tons of other teams are eyeing the No. 1 overall pick in the 2006 draft, including the Seahawks, Cowboys, Titans and Chargers. Basically, every team with even a slight need at defensive end wants to sign him.

While I definitely see the need for an impact pass rusher (who doesn't?), that doesn't mean the Falcons should sell their soul to acquire Williams. But with that said, just imagine what Mike Nolan and Smitty could do with a talent like that coming off the edge. I smell playoff wins.

Oh, There's Another Defensive End In Play
Think you know who it is? If you guessed Kendall Langford (who?), then you are absolutely correct. D. Orlando Ledbetter of the AJC reports that "some in the agent community" feel the Falcons could try to sign the 3-4 DE.

Yes, a 3-4 defensive end. Langford, who played under Nolan during his tenure in Miami, profiles much more like a Corey Peters as supposed to an Abraham. In all likelihood, he would become part of the defensive tackle rotation in Atlanta.

However, in all honesty I'm not sure this signing makes complete sense. The Falcons already have Peters, Jonathan Babineaux- a very underrated and explosive d-tackle- and first-rounder Peria Jerry. Langford, while solid, wouldn't exactly come dirt cheap, either. While it's not implausible, my gut reaction is no.

Atlanta Looking At LB Lofa Tatupu
Adam Schefter has reported that the Falcons worked out the ex-Seahawks middle linebacker on Friday. Just like Manuwai, Tatupu also spent the entire 2011 season out of football. The main difference here, however, is that Tatupu is also a three-time Pro Bowler. If healthy, he could prove to be another prudent low-risk signing.

More importantly, this interest in a quality backup inside linebacker validates my feeling that the Falcons will not re-sign free agent Curtis Lofton. With Akeem Dent apparently ready to take over the mike-backer role on defense, it would make sense that the Falcons want a cheap insurance policy should Dent falter. Adios, senor Lofton.

J-Snell Back In Red And Black
Remember I mentioned key in-house signings? Well, now you can add one more to that list: running back Jason Snelling. The Falcons reportedly signed the versatile backup to a three-year deal worth about $4M in total money. Snelling's skills as both a capable runner and receiving threat were already known, but he also filled in capably at fullback last season after Ovie Mughelli went on IR with a knee injury.

However, with Snelling's re-signing comes a strong possibility that the Falcons will either restructure Mughelli's contract (due $3M this season) or even straight up release him. A knee injury at that age won't be easy for Ovie to recover from, and so all in all this was a smart signing by the Falcons.

Dunta Robinson, Team Player
Finally, a pleasant surprise for Thomas Dimitroff and Falcons fans alike: CB Dunta Robinson has reportedly restructured his contract, giving Atlanta an extra $1.75M in cap space. Along with lowering his base salary by about $1M this year, Robinson also waived a $3M bonus that was due this season. What a nice guy!

Yasinkas speculates that this is likely a sign the Falcons are "gearing up for a big splurge in free agency" (Mario Williams alert), and I couldn't agree more. Dunta must be pulling for the Falcons to sign his ex-teammate just as hard as anyone else. I think by the time next week rolls around, we could be pleasantly surprised.

For more on the Falcons, check out The Falcoholic. For everything else offseason-related, head over to SB Nation's NFL hub page.