Let's face it: the NFL offseason more often than not is filled with over-enthusiastic hype followed soon after by a string of unexciting moves and signings. Very rarely do we witness an offseason where something truly unexpected happens, with last year's trade for Julio Jones being one giant exception.

But after a few questionable signings in recent years (see: Dunta Robinson, Ray Edwards), it's somewhat relieving to see Thomas Dimitroff and the Falcons make a couple of safe, cost-effective signings while addressing a huge free agent class.

They may not be the most exciting moves, but inking Thomas DeCoud and Kroy Biermann to some fairly cheap deals is probably the best course of action Dimitroff can take.

With those two signings, let's praise the return of the spreadsheet and take an updated look all free agents: 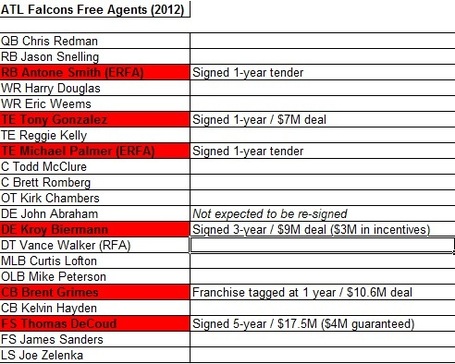 As you can see, DeCoud's deal puts him at just under $4M annually, and a good chunk of Biermann's contract is performance-based. This works especially well because both are players that could end up flourishing in Mike Nolan's defensive system.

The biggest knock against DeCoud has always been his tackling. He tends to either take a poor angle to the ball or simply not wrap-up, and several times last season we saw a back-breaking play caused by No. 28 throwing himself into the ball carrier instead of tackling. But DeCoud's prowess as a ball-hawking safety has never been in question, and his true value really comes from that skill.

Nolan's interest in Biermann comes in his potential in coverage. With more indications surfacing that the Falcons will be running some kind of fancy 4-3/3-4 hybrid defense next season, Nolan apparently feels as though Bear-man has the mobility to drop into coverage in a similar way that (gulp) John Abraham did under Brian Van Gorder. We'll see...

In addition to those two, the Falcons also inked their two exclusive right's free agents in Antone Smith and Michael Palmer. Smith has been a capable special teamer, whilst Palmer was the team's primary backup tight end for most of 2011. Both are solid players.

Going forward, the team will probably turn to address Curtis Lofton's contract situation, but in all likelihood I think his days as an Atlanta Falcon are almost up. With Cleveland's D'Qwell Jackson- a very comparable linebacker- receiving a five-year / $42.5M extension this offseason, that may be too much money for 5-0 to stick around.

Dimitroff also has to consider two key offensive contributors in Harry Douglas and Todd McClure. While Douglas has apparently drawn interest from the Cardinals as an underrated free agent, McClure seems like a solid bet to finish his career as a Falcon. Recently, Mike Smith went as far as to say the veteran center was the "cornerstone" of the O-line for the past four years.

But enough speculation. We'll have an answer to all these questions and more not long after 4:00 PM on March 13 finally rolls around.

For more on the Falcons, check out The Falcoholic. For everything else free agency or draft-related, head over to SB Nation's NFL hub page.