ESPN The Magazine has brought on professional comics artists for its NBA preview issue, recreating classic Marvel covers. Getting the most attention is the Cleveland Cavaliers image, which shows LeBron James leaving his Cavs jersey in an alley alongside the declaration, "King James no more!" It's a reference to a page from an issue of Spider-Man in which a teenage superhero abandons everything he's worked for in his young life, taking his talents to [I don't know, man, but I'm sure RealGM does. Nerd out with RealGM, because that's where any worthwhile insights on this are going to be coming from].

Here's the Atlanta Hawks image, featuring Joe Johnson receiving archery advice from Hawkeye, a member of The Avengers who makes all the other Avengers stand around while he shoots*. Yes, he's a good guy. Also, that title line wouldn't make a bad-looking logo at all: 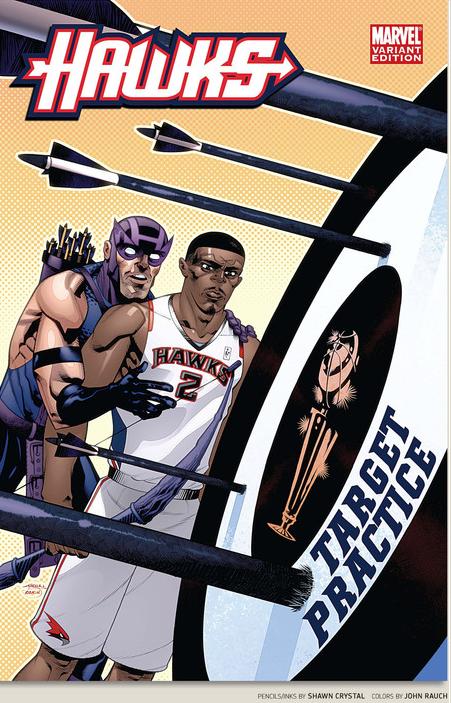 Other cover tributes feature Kevin Durant as Thor, Kobe Bryant as Iron Man, Dwight Howard as Wolverine (looks more like the Hulk to me, but whatever), Michael Jordan as Nick Fury, Carmelo Anthony as Cyclops, and so on. They're all pretty awesome, though the best might be the one showing various Blazers being rebuilt as cyborgsafter their impressively injury-riddled 2009-10 season.

Again, stick with RealGM on this one, as far as what in the world it is you're looking at. If you drew up a Venn diagram for things you should consult RealGM about, this would be near the center.