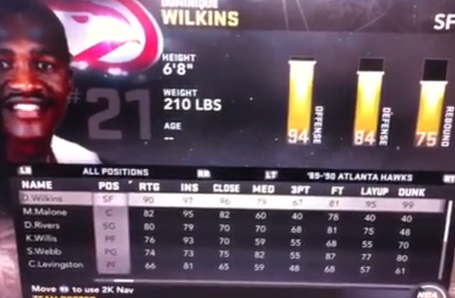 Screenshot'd via, in which all team rosters classic and otherwise are flipped through. Video even has the "Wait for better processing" going on, meaning it was uploaded just minutes ago.

Dominique Wilkins at 90 sounds horrible, but it's tied with Karl Malone's first MVP season rating. They've got various Scottie Pippens rated the same or lower, Magic Johnson at 92, and an Isaiah Thomas at 90 as well. A Clyde freaking Drexler is a 92, while a Patrick Ewing makes an 89. I'm using indefinite articles because there are multiple seasonal versions of some of these guys.

The only old bros significantly better than Nique are Larry Bird (95) and about 17 different Michael Jordans (99's). If he were included with modern players, he'd be the seventh-best player in the league, only a point behind Kevin Durant. I can live with that.

The 1989-90 Hawks went only 41-41, but are included in the game because of Wilkins' famous shootouts with Jordan. The complete Hawks' lineup, via:

Georgia Tech fans will be pleased to note Mark Price merits an 85. Actually, they probably won't, because they're like that.