LeBron James Clubbed In The Head By Zaza Pachulia: Photo Of The Day

Share All sharing options for: LeBron James Clubbed In The Head By Zaza Pachulia: Photo Of The Day 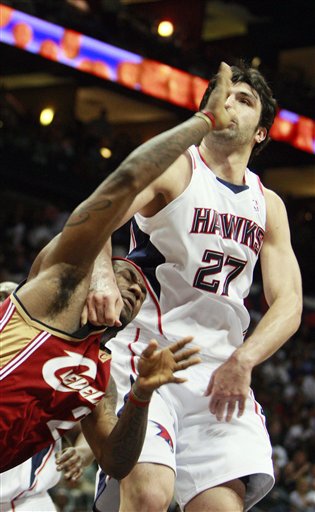 The Atlanta Hawks are playing the Cleveland Cavaliers tonight, or what's left of them, at least. Losing LeBron James to the Miami Heat broke them, but it looks like losing to him destroyed them. They've gone 1-10 since James returned to pound his hometown team by 18 points three weeks ago.

The Hawks were on the receiving end of some of James' most dominant work in Cleveland, getting swept in the 2009 Eastern Conference semifinals and losing each game by double digits. The usual suspects could have been accused of not putting up a fight, but not Zaza Pachulia, who puts up a fight on his way to fights.

A little bit of acting by James makes this one look worse better than it was, but still. Who doesn't want to forearm LeBron in the side of the head every once in a while?

Atlanta Hawks Zaza Pachulia fouls Cleveland Cavaliers' LeBron James in the second half of the Hawks 84-74 loss in Game 4 of the NBA Eastern Conference semifinals basketball playoffs in Atlanta, Monday, May 11, 2009. Over the last five seasons, the Hawks have managed quite a rebuilding job, going from a 13-69 debacle to the second round of the playoffs. (AP Photo/John Bazemore)