Former NBA referee Rashan Michel had a beef with NBA Hall of Famer and Atlanta Hawks legend Dominique Wilkins. So instead of going to court get that money that Nique allegedly owed him for some "suits," he decided to settle it the old fashioned way -- with his fists.

But as you can see from this booking photo from the Fulton County Sheriff's Department, things didn't end up too well for Mr. Michel. 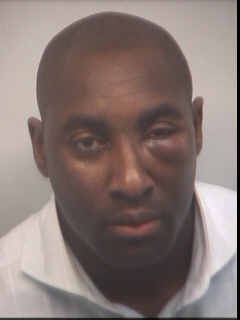 Michel was a replacement ref in the '95-96 season and also officiated NBA games from 1997-2001. His NBA refereeing career overlapped with 'Nique when "The Human Highlight Film" was winding down his career with the Orlando Magic in the 1998-99 season. He saw what a beast Wilkins was on the court and should know better than to try to throw down with the 6-foot-8 Wilkins -- especially on his own turf.

If you believe the reports from NBA.com Sekou Smith's sources, the "fight" was more like the beatdown that Mike Tyson put on Marvis Frasier back in the day -- you know he of the 30 second (actually less than 20 second) knockout.

Michel may have tried to land the first blow, but 'Nique landed three solid punches, while Michel didn't connect with anything solid.

As a parting gift, Michel spent the night at the Fulton County Jail, where he was booked on simple battery charges and held on a $1,000 bond. The Fulton County Sheriff Department's website says that he's still "in custody" as of early Thursday morning.

So not only did Michel allegedly lose out on a business deal, but he also lost a fight, his dignity and got himself a cellmate in the deal, too.

As for 'Nique, maybe there's a "Celebrity Boxing" deal in his future. One has a feeling that the 51-year-old Wilkins could hold his own against Jose Ozzie Canseco or whoever the former 'roid raging Oakland Athletics and "Celebrity Apprentice" star has out there impersonating him in the ring.