Share All sharing options for: PHOTO: Rashan Michel Hanging Out With Barack Obama

So Rashan Michel, the former NBA referee who ran up on Dominique Wilkins after Wednesday night's Atlanta Hawks game, has a Myspace page. I realize that 403'd background makes it difficult to tell what you're looking at, but do a CTRL+F search for "Rashan Michel Custom Clothier." That's the name of Michel's clothing business, which was the source of this whole Philips Arena kerfuffle.

As I was saying, via Michel's Myspace, here's a photo of Michel (on the right) hanging out with President Barack Obama (you should be able to spot Obama on your own): 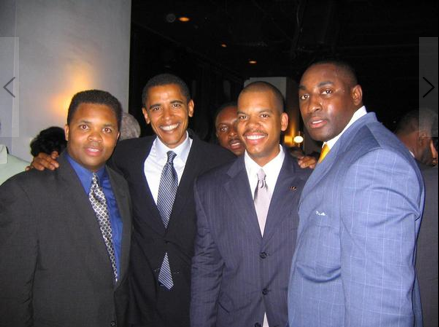 I have no idea what to make of that. Assuming this is some sort of Atlanta luncheon or what have you and that Michel may have so much as shook Obama's hand in passing.

As a knowledgeable hoops fan, goodness knows Obama would've advised Michel not to try and fight one of Atlanta's most beloved sports icons in the middle of the arena after a big win against the team's nemesis. Due to the president's constitutional law background, I'm confident he would've recommended using the legal system to reach a just conclusion.