Share All sharing options for: PHOTO: Atlanta Hawks Goin' Fishing At Stone Mountain Thanks To TNT

As is tradition, the Atlanta Hawks were officially seen out of the 2011 NBA playoffs Sunday night, when the TNT crew presented its Hawks "goin' fishing" Photoshop. Fishing with Kenny Smith: it's a rite of passage, and if we're going to laugh at the Lakers, we have to take our medicine too.

Photo via @jose3030. Click to make it much bigger: 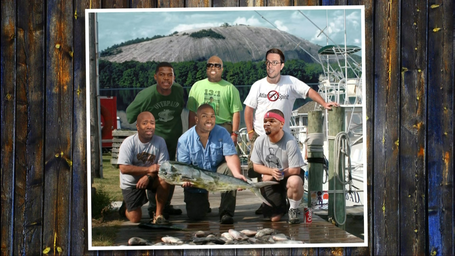 If you can't make out the details, Joe Johnson's sporting an "Overpaid" T-shirt. Josh Smith has a General Sherman shirt and a can of Coke while Smith shows his support for Ted's Montana Grill. Al Horford has the prize catch but nothing funny on his shirt, though of course that short-sleeved denim button up is the most Georgia shirt in the entire collection.