PHOTO: Jameer Nelson Has Two Tickets For Hawks-Bulls Game 1, If He Wants Them

Share All sharing options for: PHOTO: Jameer Nelson Has Two Tickets For Hawks-Bulls Game 1, If He Wants Them

Before the Orlando Magic's Round 1 series against the Atlanta Hawks, Jameer Nelson was famously caught saying "See you in Round 2" to Derrick Rose. Atlanta fans, media and players (such as Josh Smith, of course) were incensed by Nelson's presumptions. If Nelson had been an active user of Twitter, he would've caught absolute hell once the Hawks knocked Orlando out of the playoffs.

But the heat's still on, as Arthur Triche, Hawks PR man, demonstrated Monday. He tweeted a picture of two tickets reserved in Nelson's name: 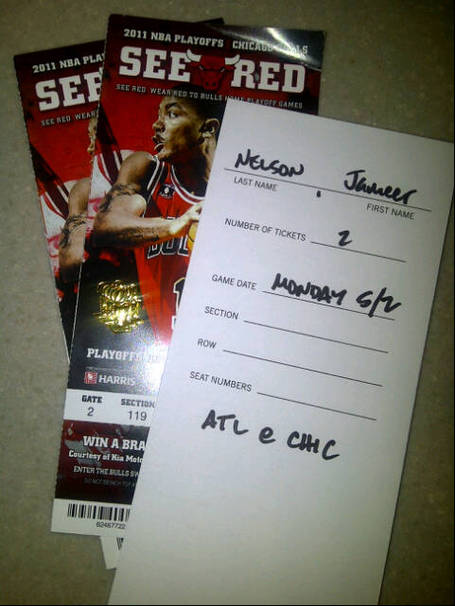 Pretty darn good seats, too -- section 119, lower bowl in the corner. Triche himself called it "a page out of Jerry Glanville's book," thus making it the most Atlanta thing anybody has done all day. Cheers to you, world's trollingest vice president of public relations, and go Hawks.