During halftime of Game 4 between the Chicago Bulls and Atlanta Hawks, TNT's Charles Barkley had to find a way to shield himself from Josh Smith's raining missed jumpers. Wisely, Chuck opted for his trusty Test Dumbie helmet -- some would refer to it as a crash test dummy helmet, but they don't know you like Sir Charles does, facemaskless football helmet with duct tape: 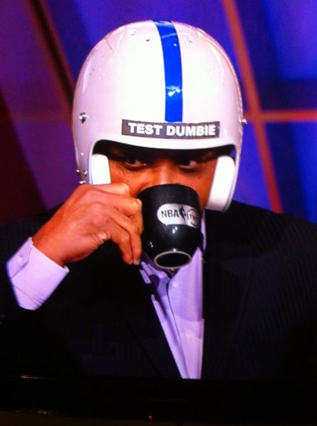 Philips Arena fans have been trying to discourage Smoove's outside shooting all night long, as is custom. The "NO!" and "BOO!" reactions that bookend pretty much every Smith deep shot have been going on forever, but they really seem to pick up in the postseason. Don't ever say Atlanta's fans don't know when it's time to step their games up, friends.

Marv Albert and Steve Kerr have been highly amused by Smith's shooting all night -- just trying to figure out how far ahead the Hawks could be tonight if he hadn't given away three or four possessions for free.