That one little extra-participatory Philips Arena section of Atlanta Hawks fans always steps it up for playoff games. Who could forget last year's deer hunter ensembles for the series against the Milwaukee Bucks? But what to do for Game 4 against the Chicago Bulls? Having already seen the Hawks' dance team work the bullfighter thing for all it's worth, Section Fun had to think bigger. How about current events!

Here's a sign that claims the recently departed Osama bin Laden was a Bulls fan, which does not seem accurate. Click to make this much bigger, and try to help us make sense of it if you can (pic via mocksession.com): 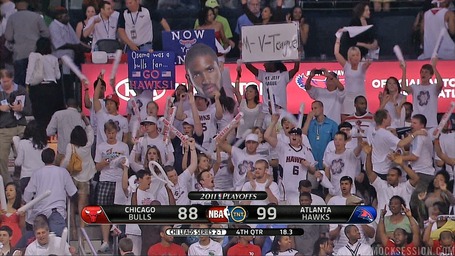 It's recently been revealed that bin Laden had been plotting to attack Chicago, along with Los Angeles and D.C., so he probably wasn't a Bulls fan, but Michael Jordan was pretty popular everywhere in the '90s, so. Either way I do not feel this sign conveys a truth.