Share All sharing options for: NBA Lockout 2011: NBA.Com Now Has Player Bios Looking Like That Made-Up Guy On NBA 2K11

Well, at least it's an improvement.

NBA.com's ministers of web propaganda pulled an all-nighter, scrubbing just about every picture imaginable from the league's website. While at first, NBA.com resembled a high school newsletter, it  has since been restored to at least a viable 1990s website.

Just don't try to be an NBA player. As evidenced here from this page of some guy named Josh Smith of a team (we think) is still named the Atlanta Hawks, you can't tell what he looks like anymore. He's simply become that anonymous made-up player you'd see on NBA 2K12. 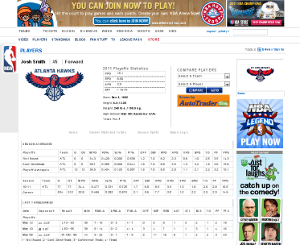 What a great reward for all that service there, Josh.

Of course, the web design is a marked improvement from NBA lockout version 1.0, which looked something like this: 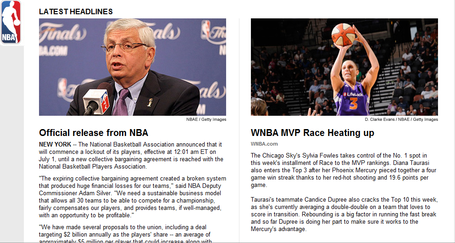 Yep folks, NBA Commissioner David Stern is doing exactly what we expected someone who I have joked to be a "mob boss" would do. Scrubbing all references to those low-level guys that brought in the business, while telling his "cappos"  -- in this case his 29 owner friends, including the least honest owners in North American sports a/k/a the Atlanta Spirit -- to put a sock in it.

How far has the league gone in their vandetta against those "turncoat" players? Well, apparently even the arena security guards have been told not to fraternize with the players during a lockout according to Yahoo! Sports' Marc J. Spears.

Yes, seriously. The NBA mafia is telling people who their friends can be outside of work, all to cover their butts in a labor dispute. Generally, I'm not much of a union guy, but that's just beyond terrible.