Atlanta Thrashers Should Retire Dan Snyder's No. 37 Before Winnipeg Move

Share All sharing options for: Atlanta Thrashers Should Retire Dan Snyder's No. 37 Before Winnipeg Move

This FanPost at Bird Watchers Anonymous argues the Atlanta Thrashers should retire the jersey number of Dan Snyder, the player killed in the 2003 car wreck that also cost the team Dany Heatley. After Snyder's death, the team -- not then owned by the Atlanta Spirit Group -- included a moment of silence and bagpipe sendoff before their next home opener.

The 2003-04 season was officially dedicated to Snyder's memory. Players wore black No. 37 patches, with the same symbol also painted on Philips Arena's boards.

But his jersey number was never retired. Before sending the team to Winnipeg, the ASG should do one thing to honor the short history of this franchise and correct that oversight.

Saturday at the Gulch, numerous fans told me the Snyder memorial was the most impactful moment of their brief Thrashers fandom. The team is almost certainly going to move to Winnipeg, and should probably be named the Jets upon arrival, but relocating the Thrashers franchise without recognizing Snyder's role in its history would be the most efficient thing the organization could do to earn even more spite from its original fanbase. 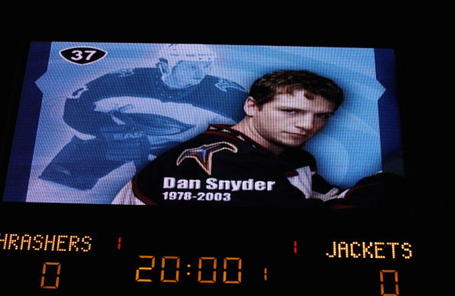