PHOTO: Manitoba Moose Seem To Think They're Leaving Town For Some Reason

Share All sharing options for: PHOTO: Manitoba Moose Seem To Think They're Leaving Town For Some Reason

As Atlanta Thrashers fans have to deal with the news that their team will be announced as relocating to Winnipeg on Tuesday, we're forgetting about another fanbase who'll lose a team in all this. Manitoba Moose fans, let us remember you. Well, Manitoba Moose fans who will not immediately become Winnipeg Jets II fans. That's a really small group.

Monday night, the Moose had this image on the front of their website: 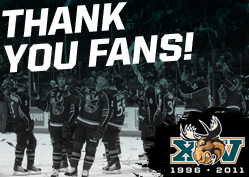 The Moose are reportedly leaving Winnipeg's MTS Centre and moving to Canada's east coast. At least a few Winnipeg hockey fans won't even notice they're gone, as the town will again be a major league sports city with the return of the NHL.

Please, won't somebody think of the Moose? We will accept the Moose if nobody else wants them.