Today's wake at STATS was not the best planned event. Scheduled at 11:00 on a Friday afternoon on Marietta Street, it was absolutely doomed to failure. Of course, if you're familiar with Atlanta and the traffic, you realize that the only people who eat at Stats at that time - between 11-1 - are the people who work in the area. Everyone else is at their jobs 30 inaccessible miles away.

Fans asked about the scheduling - if it could be moved to a Saturday, perhaps? This was the response that 790 the Zone gave:

@inaneenglish The Saturday rally was not all that great either-250 people. Skip work for a bit and come on down. get some free food!less than a minute ago via TweetDeck

FYI to the kind folks at 790, 250 >> 20. Just some math. A disorganized fan gathering drew ten times the people than something that a radio station threw together. with just as much planning. After the jump, a little more poor planning.

This was the sight that greeted us when we walked across the street from the parking garage: 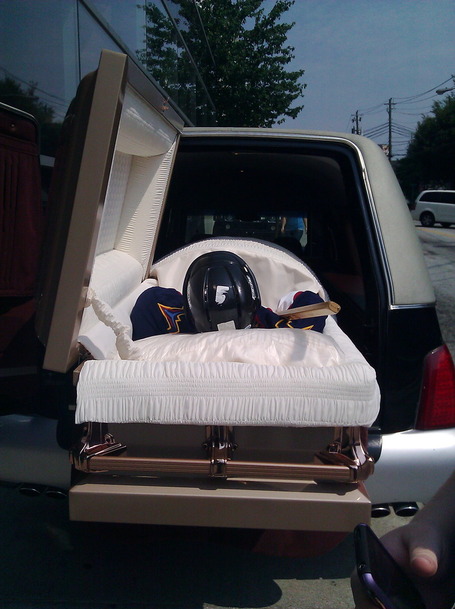 You have to get right up to it to see that Thrash's mug has been inexplicably placed inside. From this angle, or from across the street, it practically looks like a player in a coffin. And, considering what has happened in this franchise's past, this is extraordinarily inappropriate.

Buck Lanford from Fox5 was there to cover the event, as was CBS46, but the turn out was probably 20-25 people at the most. Poor planning turned this into a chance for Canadians to laugh at Thrashers fans again as being a poor fanbase.

This wasn't the fans' fault, though. The only mascot who managed to turn up was GSU's. Of course, 790's mascot Handy, the giant foam finger, was there, so maybe it was a success after all. Keep your ears peeled for a properly done wake at Gasthof's that involves boots of beer, and little to no morbidity.