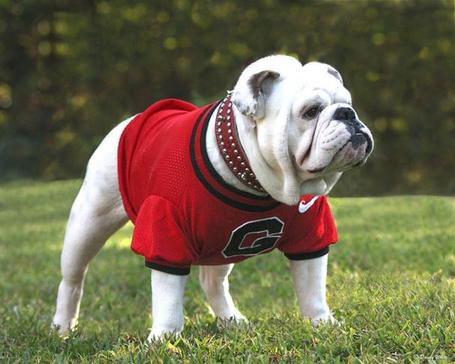 Uga VIII's swearing in will take place right before kickoff of today's homecoming game against Vandy. The Collar Of Dawgness will be removed from interim mascot Russ and placed on the new guy, and both will enjoy the game together in Uga's new freezing throne room. Since the game is against Vanderbilt, you'll hear Georgia fans talk about VIII's undefeated record for the next six days at least.

The only way to see it live will be to attend, from what the internet understands, though surely video will escape the hedges at some point.

The 13-month-old, white English bulldog weighs 55 pounds and is the grandson of Uga VI. Here's an AJC scouting report of the new mascot.