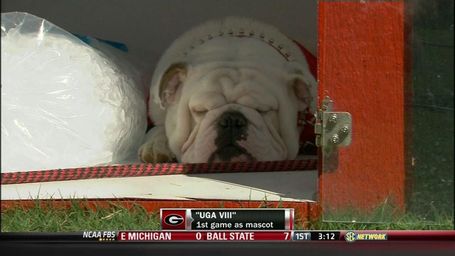 The lack of drama in the game has not gone unnoticed by Uga VIII. (Courtesy Bubbaprog at 30fps)

We're at intermission of Georgia's 2010 Homecoming game, and right now Uga VIII has as many points as the Vanderbilt Commodores do. Georgia pushed the score to 22-0 on a 25-yard Blair Walsh field goal with 18 seconds left to go in the half.

A few untimely dropped passes have dinged Aaron Murray's completion percentage, but other than that he's been his usual poised, efficient self -- 9-of-17 for 137 yards, a short TD to Kris Durham, and no picks. But the real story has been the running game, in which Washaun Ealey (10 rushes, 89 yards) and Carlton Thomas (3 for 31 and a score) have been men on a mission for redemption.

The defense, meanwhile, has maintained its high level of play from the Tennessee game -- Larry Smith (3-of-8, 58 yards) has broken loose for a couple nice passing plays, but neither he nor last year's SEC Freshman of the Year, running back Warren Norman, have accomplished anything on the ground. Even if you take out the errant snap over Smith's head that accounted for Georgia's first-quarter safety, the previously potent Vandy running game has been limited to only 45 yards on 13 carries.

Other stats: Georgia has 12 first downs to Vandy's five; lead big in total yardage, 299-76; and have a time-of-possession advantage of six and a half minutes. After the Redcoat Band performs and the Homecoming queen is crowned, the Dawgs will get the ball first in the second half.