This isn’t video of the hit by Auburn Tigers DT Nick Fairley that knocked Georgia Bulldogs QB Aaron Murray out of tonight’s game — in isolation, that hit was borderline, but you can go here to draw your own conclusions on that video. This hit was a much more egregious shot earlier in the game, when Fairley lowered his helmet and planted it in Murray’s spine well after the ball had been released. Break out the cliches, because this is a dirty hit, cheap shot, punk move, and so forth in every way:

Though it drew a roughing the passer penalty, it should also be considered a piece of evidence as we move forward. Fairley’s body of work on the day strongly suggests he intended to knock Murray out of the game by any means necessary, especially after he spent several minutes following the injury strutting and mugging all over the field. Two Auburn defenders will miss time against the Alabama Crimson Tide, and Fairley should join them on the bench. 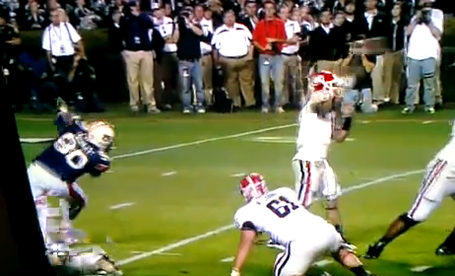 Murray has already released the ball at this point. Fairley was about ten feet away, yet still decided to go hit Murray. It would be one thing if Fairley had been barreling towards Murray at full speed until now -- though a full-contact hit in that instance would still merit a flag -- but he wasn't. He actually sped up from this point on, even after he clearly saw Murray release the ball. He wasn't blocked into Murray. Nor was he unaware the ball was out.

And he had no excuse for leading with his crown, even if he did somehow think Murray still had the ball. I guess we can applaud him for not driving Murray into the turf on this play.