Mark Richt's Got A Big Freaking Gun: Caption This Photo

Share All sharing options for: Mark Richt's Got A Big Freaking Gun: Caption This Photo

After the jump, a photo of Georgia Bulldogs head coach Mark Richt wielding what my panel of firearms experts has concluded is a M4 carbine, a light version of a M16A2 assault rifle. Here is footage of it in Call of Duty, if that helps. His solemn and downward expression resembles a man preparing to put something out of its misery, the only situation in which one can imagine Richt employing a potentially life-ending weapon that isn't Justin Houston. This image requires your attention. 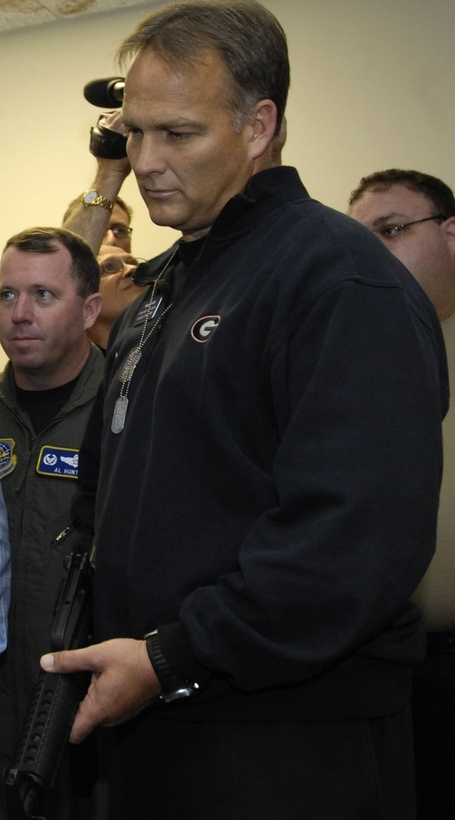 All black down to the wrist watch, Richt is now in the running to be named the most badass Baptist football coach ever. This jewel of a photograph has been just sitting there on his Wikipedia for gosh knows how long, begging for 'Shops. It's apparently from a USO thing.

Which gun would Les Miles use? Nick Saban? Robbie Caldwell? This all just makes me want to find a GIF of Paul Johnson loading a musket for two minutes, setting it down, and punching Frank Beamer.

Ht to weapons specialists @benmmc and @zacharybrown for identifying the firearm family of The Drill Finisher.