Should 32 UGA Football Players Be Suspended, According To NCAA Rules?

Share All sharing options for: Should 32 UGA Football Players Be Suspended, According To NCAA Rules?

Thirty-two Georgia Bulldogs football players left the designated team area while a fight was going on in last Saturday's game against the Auburn Tigers. A valid argument can be made that those players did not actually fight anyone or throw any punches. But, their intent when they left the sidelines during the fight was exactly this: to participate in the fight. Whether the individuals were simply planning on breaking up the scuffle, or if they wanted to protect a teammate from injury, those two options are in themselves participating in the fight.

And by rule, they should be suspended for a game.

PENALTY-15 yards from the succeeding spot, plus first down for Team B fouls if the first down is not in conflict with other rules. Disqualification for the remainder of the game and for the next game [S7, S27 or S38, and S47].

Let's go to the tape and see which Georgia players left the team area during the Auburn game: 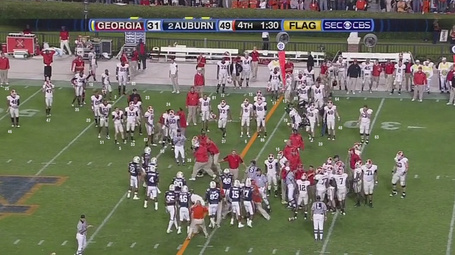 The Georgia players left "their team area to participate in a fight," and they should face "disqualification...for the next game."

A larger version of the image can be seen here.

According to the creator of the image who did the hard work of counting everyone, here are the players on the field that were not involved in the play: