Georgia Tech Yellow Jackets fans, more math people than English people, have been known to spell the University of Georgia's name as georgie and u[sic]ga. The former is attributed to Bobby Dodd's Appalachian pronunciation of the state's name, which never seemed to flare up when he spoke of his own school, but for the Georgia Bulldogs fan the tradition is further evidence of Tech's inferiority complex.

In that case, ESPN's graphics people are sick of the Dawgs too: 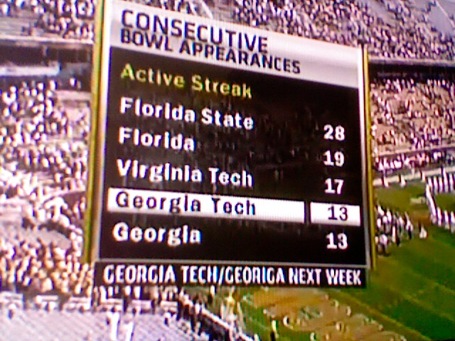 That's "Georgia Tech/Georiga next week," for those of you on screen readers. No, we don't go out of our way to post every typo that shows up on TV, and we aren't perfect typists ourselves by any means, but this one's pretty good. The word is spelled correctly three times, and twice for Tech, suggesting the ghost of Bobby Dodd is both manning the controls for ESPN3.com and feeling mischievous this afternoon.

The point of the graphic is worth discussing as well, as both state FBS schools should be able to keep pace with the three ahead of them by winning one more regular season game each to become bowl eligible.