Georgia is a football factory, and the state is about to finally have enough major college football programs to take advantage.

In the past three months, the Georgia St. Panthers played their first football game, the Kennesaw St. Owls announced the beginnings of their football program, and the Mercer Bears decided to bring back football after 70 years. We'll take all the football we can get, but isn't the Peach State going to run itself dry? Are there really enough quality football players around here to keep all these teams competitive?

Georgia certainly produces its share of top football players. Last anybody checked the state ranked fifth at turning out NFL players, beating four larger states and coming within a decent draft or two of Ohio. So there's talent here, but is there enough?

Before Georgia St. added themselves, the only major Georgia football programs were the Georgia Bulldogs, Georgia Tech Yellow Jackets, Georgia Southern Eagles, and Savannah St. Tigers. Four programs might sound like quite a few, but not if you compare it with other states with big football markets that also produce tons of football talent. Here's a list of the 14 states that have turned out the most current NFL players -- by hometown, not by college -- along with the number of major football programs for each state:

Granted many of those Carolina schools or whatever are basketball-first, but still. Remember, that's before Georgia St. joined. As you can see Georgia had the second-fewest number of FBS/FCS programs among states that have produced the most current pro football players. The Peach State had almost a third of the football programs of Pennsylvania despite producing about a third more major football talent.

And this isn't to say that Mercer will be pumping out NFL linemen in its first decade. I used the NFL numbers because they're about all I could find on the subject, though I'm sure FCS All-American data or whatever other data you'd like to collect would line up.

With too few football programs in Georgia, where do Georgia kids end up playing? Too many are populating the rosters of other top schools. The Appalachian St. Mountaineers, the top-seeded FCS playoffs team, have 17 Georgia natives on their roster and only 48 from North Carolina. The Jacksonville St. Gamecocks have 29 from Georgia and 45 from Alabama, the S. Carolina St. Bulldogs 11 from Georgia and 60 from South Carolina, and so on. By contrast Georgia Southern has 97 players from Georgia and only about 20 from elsewhere. Each school has its own recruiting preferences and pipelines, but there's clearly an overflow here. And no I'm not saying KSU will be outrecruiting App State in 2015, derp.

Here's an easier look at the disparity: 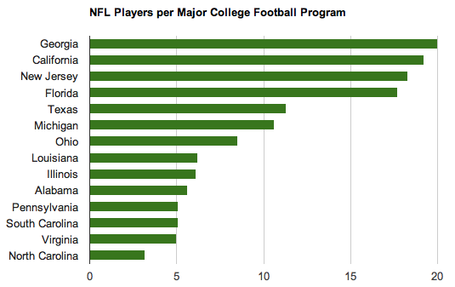 Before these three new programs, Georgia had too few avenues for local players to play local college football compared to other major states. With three new programs, that ratio goes down to 11.4, or somewhere between Texas' and Michigan's. This isn't to say that bringing back Mercer will cause Florida St. Seminoles or Auburn Tigers recruits to choose Tech or UGA, but that another, say, 40 to 60 FCS recuits per year will be able to play football close to home.