Georgia Bulldogs Top Five Stories Of 2010: The Thrill Of Victory, The Agony Of Red Undies

Wild rides on the tennis court, the football field, and the streets of Buckhead: It was that kind of year for Georgia athletics.

Share All sharing options for: Georgia Bulldogs Top Five Stories Of 2010: The Thrill Of Victory, The Agony Of Red Undies

If you're a freshly minted high-school graduate who enrolled at the University of Georgia sometime in the past 12 months, boy howdy, did you pick a weird time to get to Athens. The year in Bulldog athletics could've been scripted by Monty Python's Flying Circus, with every big victory being matched by a bizarre, hair-pulling-out defeat (and, frequently, an off-the-field incident that would've been just as comfy in the pages of the National Enquirer as the sports section of the Banner-Herald). Oh, hey, new athletic director Greg McGarity -- have fun sorting all this stuff out.

Anyway, here are the top five stories in Bulldog sports from the year we just waved goodbye to:

5. John Isner makes his mark in Wimbledon history. Actually, to say that the 2007 Georgia graduate (and member of that year's NCAA tennis championship team) "made his mark" is a gross understatement. Isner pounded, gouged, and hammered his mark into the turf of Wimbledon's Court 18 over 11 hours and four minutes of play against Frenchman Nicolas Mahut, a match that sprawled across three separate days.

The match qualified as grueling even before the pair got to their epic fifth set, with the linescore reading 6-4, 3-6, 6-7(7-9), 7-6(7-3) -- and then, at 2:05 p.m. on Wednesday, June 23, they began the deciding set. At 5:45 p.m. that evening, they broke the record for longest match in tennis history, but they weren't even close to finished -- and they played for another three and a half hours before the daylight had faded too much for them to continue, so they suspended play again, tied at 59.

They picked back up on Thursday afternoon, and at 4:48 p.m., Isner fired a backhand passing shot down the line and past Mahut, and history's longest tennis match would go down in the books as a victory for a UGA alum. An exhausted Isner went on to lose in straight sets to Thiemo de Bakker in the next round, but his place in sports history -- and the 2010 ESPY Awards, where he accepted an award on his and Mahut's behalf for Best Record-Breaking Performance -- was already secure. 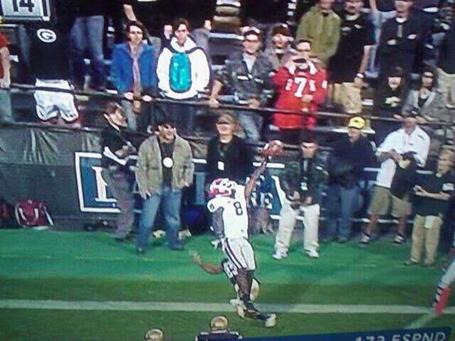 4. Where have you gone, A.J. Green? Bulldog Nation turns its lonely eyes to you. When the linchpin of Georgia's offense was held out of the 2010 season opener against Louisiana-Lafayette for mysterious reasons, most Dawg fans assumed (or hoped) he'd be right back on the field once the NCAA was properly convinced he had nothing to do with the agent scandal then sweeping across college football in the Southeast. He didn't -- but he had sold a signed jersey to a Facebook acquaintance who was later discovered to be a shade-tree agent himself, and the NCAA deemed that offense worthy of a four-game suspension.

You can't blame Green for the misery that followed -- there's no way a team this talented should've ever depended so much on a single player -- but it's hard to deny that Green's absence for the first month of the season more or less killed Georgia's 2010 season before it had even gotten started. With Green in the lineup, the Dawgs finished the regular season on a 5-2 tear; without him, they started the season an unthinkable 1-3 (and lost his first game back, a 29-27 stunner to an awful Colorado team, just for good measure).

That Colorado game was a microcosm of just how reliant the Dawgs were on their star receiver: With Green on the field and an integral part of the game plan, Georgia ran 40 plays that averaged nine yards apiece; with Green on the sideline due to cramps, the Dawgs ran 19 plays for a mere 46 yards. No single statistic gives a better clue as to why a promising 2010 season came so close to the brink of outright disaster for the Bulldogs.

3. Defensive coordinator wanted! Apply within. The complete overhaul of Georgia's struggling defense was set into motion fairly simply -- Mark Richt fired defensive coordinator Willie Martinez just four days after the 2009 regular season concluded. Replacing him, however, was a process that turned into something akin to selecting a new pope. Feelers were sent out to LSU's John Chavis and Virginia Tech's Bud Foster, who stayed at VT but reaped a handsome raise from the deal; so did Alabama's Kirby Smart, who received a formal job offer from his alma mater before electing to stay at Alabama (also with a nice raise).

The man who eventually answered the call was Todd Grantham, the former D-coordinator for the Cleveland Browns who was coming off a pair of successful seasons as the Dallas Cowboys' defensive line coach.

Grantham's arrival portended more than just a major attitude shift from Martinez -- can you picture Willie ever trying to intimidate an opposing kicker with a choke gesture? -- it included a switch to the trendy 3-4 defensive front that had paid such huge dividends in Tuscaloosa.

As of right now, Grantham's grade, unsurprisingly, is "incomplete" -- his defense made notable strides in numerous statistical categories relative to the 2010 model, but it also gave up at least 30 points apiece to the Dawgs' last four D-IA opponents of the regular season. Of course, to say that 2011 shapes up as a pivotal year for this coaching staff is to demonstrate a profound grasp of the obvious. 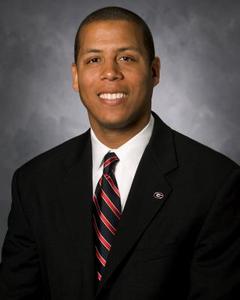 2. "I am not trying to bribe you, but I am the athletic director at the University of Georgia." Former athletic director Damon Evans seemingly had it all -- beautiful family, a career that was already hitting the stratosphere before he'd even turned 40, and an athletic department that consistently ranked as one of the nation's most profitable. Yet it was all undone at a DUI stop on Roswell Road in Buckhead, where an intoxicated Evans was caught with a lot of vodka in his system, a woman who wasn't his wife in the passenger's seat -- and said woman's red thong in his lap.

The stop occurred just before midnight on June 30, just minutes before Evans' lucrative new contract was due to kick in; five days later, university president Mike Adams determined that his UGA career was over.

The five days between arrest and dismissal were a slow burn of progressively more embarrassing revelations -- the quote from Evans in which he evidently was trying to use his influence as UGA athletic director to avoid arrest; the identity of the woman riding shotgun in his BMW 750i, soon followed by the color of her panties; the mental image of Evans weeping on the curb, insisting he didn't think he was drunk.

It was an embarrassing episode not just for Evans but for his school, which should count itself lucky that opposing fans didn't show up en masse at Sanford Stadium waving red thongs instead of power towels.

1. Mark Richt on the hot seat: Even program saviors get the blues. Nobody, even those most despondent about the direction of Georgia's football program, will utter an unkind word about Mark Richt the man. The guy adopted two destitute orphans from the Ukraine, for crying out loud; compared to most coaches these days, he's a borderline candidate for sainthood.

But there's no denying that the disappointing 8-5 campaign of 2009 cued a lot of grumbling about how few games the Dawgs were winning lately, and right at the moment when he could least afford a disaster, Richt's Bulldogs started the 2010 season 1-4 and limped to a 6-6 finish -- easily their worst performance of his decade-long tenure. For the first time since Richt first set foot in Athens, there is a very real chance that he might not be around this time next year.

That's an almost unthinkable statement to be making about the man who "blew the lid off" and led the long-struggling Dawgs on a thrilling SEC title run in 2002, their first such championship in 20 years, and repeated that feat in 2005 -- but the diminishing returns since then are hard to ignore. In Richt's first five years, the Bulldogs went 52-13 with two SEC championships; since then they're 44-20 with no titles to speak of, and they've been on a steady downward trajectory since destroying Hawaii in the Sugar Bowl on New Year's Day 2008.

In 2011, Richt will have a stunningly talented sophomore QB at his disposal, a roster with plenty of experience, and a stable of talented young recruits; however, he's also likely to be without the vital receiving skills of A.J. Green, and the defense may still be working out some kinks as it transitions to Todd Grantham's new system. Between his past accomplishments and his upstanding character, it's hard not to root for Richt as he attempts to get this ship turned around, but it's just as hard to deny that a clock has begun ticking on his tenure in Athens. Whether Richt can reset that clock is something we can't know until the Dawgs kick off in the Georgia Dome on September 3.

Other stories that just missed the cut: A rowdy night in Valdosta gets Zach Mettenberger kicked off the team -- and sets the stage for Aaron Murray's ascendance; a miserable spring for the Diamond Dawgs; and Mark Fox's first season with the basketball team includes some hope amongst the growing pains.