Shortly after Ray Drew announced his commitment to join the Georgia Bulldogs "Dream Team" recruiting class, David Pollack tweeted this picture of the two, with Drew wearing a red Dawgs hat. Pollack also noted Drew as "the new #47" -- the five-star defensive end from Thomas County Central High wore No. 99 in high school, but getting to wear Pollack's number could've been one of the perks offered to the prized player. Or he could just be, you know, David Pollack's spiritual sequel, or something: 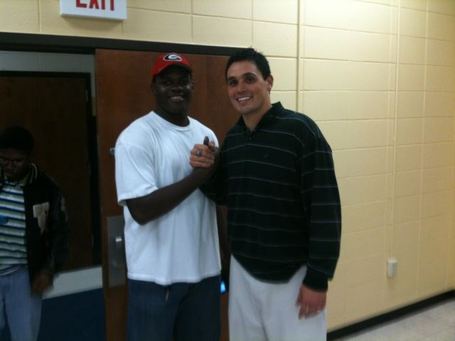 Mighty big shoes to fill, if that's how we're pitching this commitment. Pollack, a fellow Peach State defensive end (the state's defensive lineman of the year, in fact), was one of the best players in UGA football history. A three-time All-American, two-time Ted Hendricks Award winner, he became the Cincinnati Bengals' first-round pick in 2005.

Pollack's pro career was cut short by a scary vertebrae injury. These days he co-hosts an Atlanta sports talk show, hangs out with Ray Drew, and so forth.