Here's a video tour of the newly upgraded Butts-Mehre Heritage Hall. It goes through coach's offices, position meeting rooms, the weight room (which we're told can now accommodate most of the team at once), the video room, the mysterious smoothie delivery portal, the training room, and so on.

Marvel at the flock of Macs and 103-inch HDTV in the video room, but every inch of the place seems to be crawling with Apple products. The prospect of taking iPads on recruiting trips is also touted. The images all over the walls are smartly selected, pointedly showing Georgia players triumphing over SEC rivals.

An item called "the Mark Richt app" is also teased at one point, which sounds like the most tasteful and unoffensive app that could ever be produced, one that could possibly be used to log monthly truck sales. Or maybe it'll be one of those autotune fart noise games, who knows.

Sort of concerned about Richt's G-shaped desk. All those stupid rumors of him taking the Colorado job are going to ramp up once he realizes he could have a much less confining desk if he coached at a school whose name began with a C:

And finally, the greatest caption that has ever been stamped onto football facility video. This is Richt's meeting area overlooking the team's glorious new 20-yard indoor practice field, which will prepare them for punting in blizzard conditions. 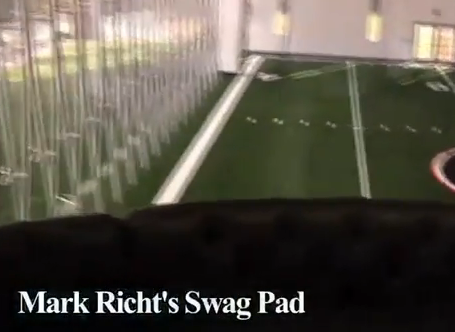 Funnest fact of all: Mark Richt's swag district even has tinted windows.