In one of the sloppier games in a traditionally sloppy series, the Georgia Bulldogs beat the Florida Gators, 24-20, to reach 6-2 on the season. UGA's now win six in a row, while Florida's dropped four straight.

And none of that means a thing, because the Dawgs just established themselves as the SEC East favorites, broke a portion of a curse and definitively shut down Mark Richt's hot seat.

Offensive game balls go to Chris Conley (37 yards and a clutch catch), Tavarres King (44 yards and a TD) and Isaiah Crowell (80 yards), while Jarvis Jones (four sacks and a forced fumble) should have something named after him in Athens. Richard Samuel, who bulled his way for a touchdown and produced the clinching first down, should also get recognition.

Game balls all around. 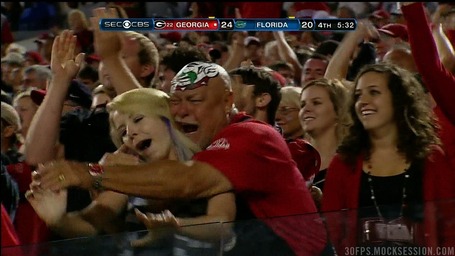 For more on this game check out Dawg Sports for Georgia coverage, Alligator Army for Florida coverage, and SB Nation's college football main page for fun of all kinds.

Georgia Vs. Florida: Dawgs Do The Partying For Once, 24-20