One testament to the magnitude of the LSU/Bama hype is that, albeit for a brief moment, it’s distracted the fan bases of other SEC teams to their own plights. WAKE UP GEORGIA. Your fate rests in the hands of the same beady-eyed defector who, at the time of your pro franchise’s darkest hour, thrust its reputation into the negative space of inky black humiliation.

Moral conundrum, thy drunken chant is "Woo Pig Doggie." It’s up to each individual UGA fan to decide if cheering FOR Bobby Petrino as a means to secure the Bulldogs a SEC Eastern Division Championship is worth a filthy conscious after the deed is done. And who are we kidding? Of course it is. It’s not even a question in SEC countries where the priorities of the fan totem stack.

Alas, as a UGA indifferent Falcons fan, I can only remind you that an Arkansas win (combined with Georgia beating Kentucky and Auburn, which is kinda/sorta a decent given) over the Gamecocks would only further a Mark Richt redemption that deep in your very soul is met with a malcontent apathy. You fear that this improbable, ugly run of conference wins against neutered doormats is simply the last gasp of a fading regime, similar to Tennessee’s 2007 Eastern Division title (known in Appalachia as "Fulmer’s Final Toot").

Sully the lily-white moral fabric Richt has woven for you this past decade if you must – this is still SPEED COUNTRY, and irrationally firing coaches has long since become a social norm – but don’t deal with the devil himself just to earn the right to fast-track your bid to the Cap One Bowl and THEN fire Richt, too. You’re better than that, Georgia. 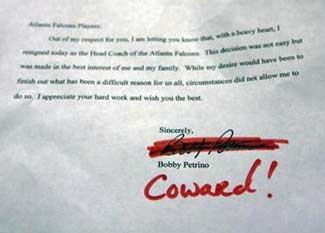 Georgia Vs. New Mexico State: Bulldogs Roll Up 63-16 Win Over The Aggies