PHOTO: LSU Picked To Beat Georgia By Entire World, Though Idaho's On The Fence

Share All sharing options for: PHOTO: LSU Picked To Beat Georgia By Entire World, Though Idaho's On The Fence

The Georgia Bulldogs are two-touchdown underdogs against the LSU Tigers in the 2011 SEC Championship Game. You'd have a hard time finding any national haircut or necktie picking the Dawgs to pull off the upset, and odds are you don't know very many regular folks doing so either. 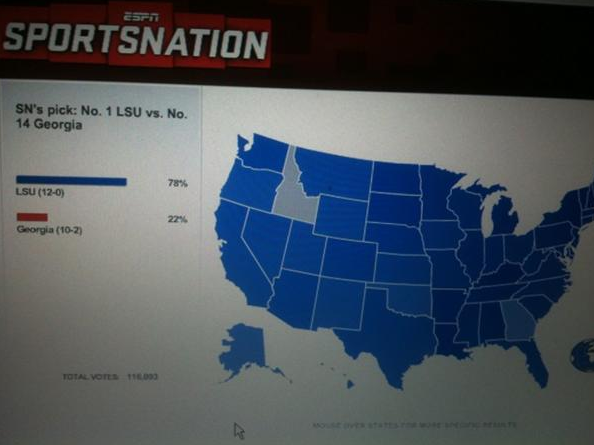 Hard to tell, but it almost looks like Boise State's native land thinks more highly of UGA than the Peach State itself does. There are hordes of LSU fans here and probably none in Idaho, though plenty a Broncos fan is likely operating under the thinking that a Georgia win would propel Boise State's RPI into March Madness contention. That's not even the right sport.

Oklahoma's also kind of lightish in its LSU selection. People pick what they want to pick.

For more information and coverage on the Georgia Bulldogs visit SB Nation's Dawg Sports, and for LSU visit And The Valley Shook.

SEC Championship Game 2011, Georgia Vs. LSU: No Sugar This Time