Share All sharing options for: SEC Football Coaches As Characters From 'Watchmen'

So the following image of all 12 SEC football coaches came out today, as they're all currently involved in the conference's winter meetings, and this group photo thing is the kind of thing you do when two of your coaches are currently leading warring factions threatening to tear one of the world's most armed populaces in two.

Hey, look at the body language and guess which two of these guys hate each other the most: 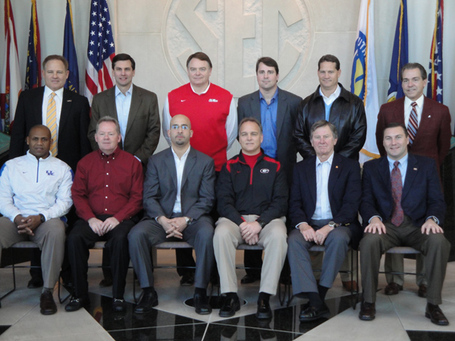 Obviously this called to mind this photo: 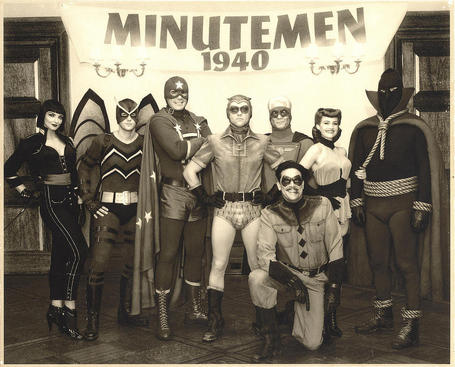 First things first, Gene Chizik is Dollar Bill. This shouldn't need to be explained. Moving on:

Houston Nutt is The Comedian: Jovial and charismatic but insane, he may have promised a roster spot to a Vietnamese mother that sadly just isn't quite going to work out. Once you realize what a joke everything is, transferring to Ole Miss is the only thing that makes sense.

Derek Dooley is Silk Spectre II: The brilliantly haired offspring of a local legend who saw his career end due to the shameful act of a power figure. (Also considered: Dr. Malcolm Long, a man of learning reduced to weeping after staring in the face of madness.)

Nick Saban is Big Figure: Three-foot-tall lord of the underworld, capable of bossing around men of gigantic stature. Everybody gets a piece of the turkey, but Bama gets to count the legs. (Also considered: the Black Freighter, an unstoppable nightmare powered by tormented souls. The process is doom.)

Lane Kiffin [not pictured] is The Giant Pink Squid Monster: How did it get here? How is it already gone? And for how long will everything remain f***** up because of it?

Bobby Petrino is Ozymandias: Doesn't mind being the smartest man on the pile of cinders, just wishes it wasn't this pile of cinders. Routinely takes on new challenges in new locations just for the academic exercise. Everything always turns out pretty well. He can save this program, but will not explain his master stroke if there remains the slightest chance of you affecting its outcome

Joker Philips is Captain Metropolis: His attempts to recruit a team with enough talent to succeed in hostile surroundings have fallen flat. I don't know anything about Kentucky football. Would really prefer to just say John Calipari is Daniel Dreiberg.

Urban Meyer [not pictured] is Dr. Manhattan: A towering, oddly-skinned genius who's sometimes here, sometimes on another planet, but never really paying that much attention to anything besides the gears and the molecules and the topography of eternity. Nothing ends, Shelley Meyer. Nothing ever ends.

James Franklin is Detective Steven Fine: Who? He's the coach at Vanderbilt.

Dan Mullen is Jon Osterman: Remember when Dr. Manhattan was an interactive mortal with a personality, capable of emotion and doubt and passion? He was still a pretty smart guy then, even if he didn't have quite the same set of resources to work with. (Also considered: Hooded Justice, who is only known for pummeling the Comedian.)

Mark Richt is Nite Owl: Not entirely comfortable with all these short-legged pants and tights. Can't we just stay in this evening? His pride and joy is a vehicle that can talk.

Les Miles is Rorschach: Somehow, the craziest guy in the whole story wins in the very last frame. Eats weird stuff. Wears a weird white thing on his head. Never compromise. Not even in the face of Arkansas.

Also, Will Muschamp has nothing to do with Watchmen. Will Muschamp is the guy in Mortal Kombat with all the guns and land mines and fireworks stowed all throughout his uniform.