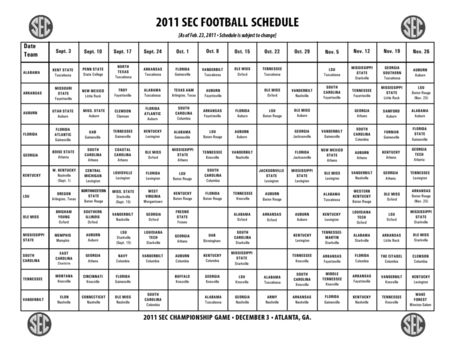 Click the SEC football schedule grid above to get a bigger, printable version that you can frame and hang next to your Bruce Pearl "Dimond" sign. The SEC's 2011 football schedule is out, listing the entire schedule for all 12 conference teams. I've pasted it beneath the jump below. There's also a PDF showing each SEC team's complete schedule for those of you who care more about what your school is doing than about where Western Kentucky will play on Sept. 1.

Complete game times aren't out yet, other than for the SEC Championship Game. Action will really kick into gear on Sept. 3, with the biggest games being Georgia-Boise State at the Georgia Dome and LSU-Oregon at Cowboys Stadium. That's not news, but it's nice to see. Only two entire calendar seasons to go!

Join Team Speed Kills for more SEC sports, and leave a comment on which of these games you're most looking forward to. Besides the Iron Bowl, of course, which will be played on a Saturday this year: