Share All sharing options for: Dancing With The Stars Scores: April 11 Show Results In Another Top Hines Ward Finish 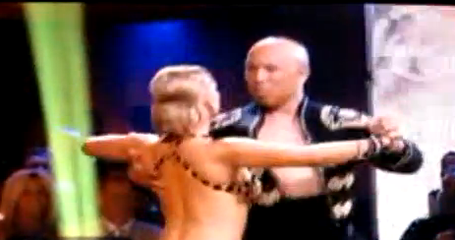 The week four edition of Dancing With The Stars' 2011 season is in the books, and it again looks like I'm stuck writing about this show. Complete writeup, scores, videos, and more here of the show's classical-themed night, which saw former Georgia Bulldogs star Hines Ward and partner Kym Johnson turn in a fiery paso doble performance:

Ward was dressed like a Pittsburgh matador, of course, but that looks like pretty good dancing, even to my completely ignorant eyes. He ended up with the second-highest score of the night, missing out on Chelsea Kane's high by only a point. The crowd booed Ward's score, too, which means America may have appreciated his showing even more than the judges did.

The results show is set for tonight at 9 pm ET.