Alabama Crimson Tide fans, your graven image has arrived: the statue of Nick Saban, commissioned in honor of the team's 2009 national championship, was unveiled at Bryant-Denny Stadium just before the 2011 A-Day Game.

Here are some pics tweeted live from the scene: as an enormous crowd gathered outside the stadium -- plus a crowd smeared along the side of the stadium as another watched on the screens inside -- the coach delivered a few words about the statue being a team honor as his giant doppelganger loomed like Hooded Justice.

And a photo of Terry Saban attempting to steer the coach into reflecting the statue's pose, via The Birmingham News, followed by video of the ceremony: 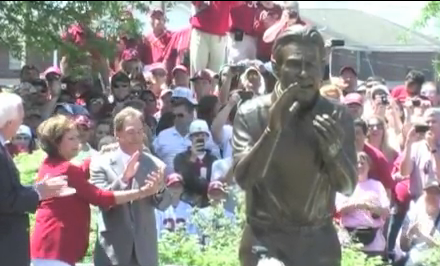 The nine-foot-tall idol is the fifth such likeness to join Bama's Walk of Champions, which includes statues of fellow title-winning coaches Wallace Wade, Bear Bryant, Gene Stallings, and Frank Thomas. It took some time for the statue's artists to recreate Saban in a manner to the satisfaction of Mrs. Saban, with the final result -- showing the coach hunched forward in the act of hollering and clapping -- earning her approval.