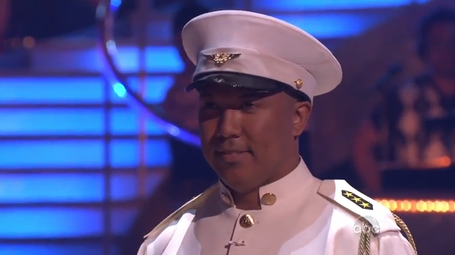 Hines Ward secured the top Dancing With The Stars score yet again this week, ensuring I remain stuck writing about this show -- complete writeup and recap of America night here. The former Georgia Bulldogs star and partner Kym Johnson dressed up as a sailor and a woman whose dress is in tatters to perform a rumba version of Lee Greenwood's "God Bless the USA," and that's officially the wildest sentence of the day. Also the first time I've ever sat through that song without being at the Stone Mountain Laser Show.

Here's a video of their performance:

Ward and Johnson again wound up with the week's high score, earning a 27 America points from the judges. The pair was followed by Chelsea Kane's 26 for her patriotic rendition of "Party in the USA," along with solid Americans Chris Jericho and Lil Romeo. Questionable citizens Kendra Wilkinson, Ralph Macchio, and Petra Nemcova tied for least patriotic on the evening, scoring only 22 points each.