Harvey Updyke's attorney Glennon Threatt says the alleged Toomer's Corner tree-poisoner was beaten and injured in a fight at an Opelika gas station after leaving his court date at 2:30 pm. That gas station has been identified as the Tiger Express (Tiger Express!) on the corner of Highway 280 and Shelton Mill, or right here.

Quizzed about the alleged attack, Tiger Express employees denied the story to the War Eagle Reader, saying Threatt's story "is not adding up" and that they hadn't seen any such violence.

Here, via @auburnbeat, is what the Tiger Express looks like, in case you wonder about Updyke's intentions in visiting the establishment: 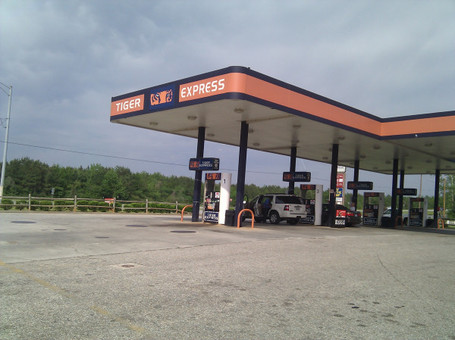 Wouldn't put it past Updyke and friends making up a story like this, especially since he was released from the hospital in about the time it normally takes to actually enter a hospital. Wouldn't put it past custodians at a venue named the Tiger Express turning a blind eye to Auburn's public enemy No. 1 catching some knuckles in the parking lot, either. This story will get weirder within the next five minutes, I assure you.