Wednesday's NCAA Football 12 video introduced new presentation elements like vehicle and animal mascots for the Georgia Bulldogs, Georgia Tech Yellow Jackets, and a handful of other SEC and ACC teams. Thursday's video features Kirk Herbstreit talking about various graphical improvements and shows some marching bands (you can catch a glimpse of Georgia's towards the end, behind the barking Uga) and stuff, but also marks the debut of virtual Mike the Tiger, the LSU Tigers mascot:

In case you can't view the video, here's a screenshot of Mike startling an Auburn Tigers player, who had apparently not been prepared by his coaches for WALKING PAST A LIVE TIGER: 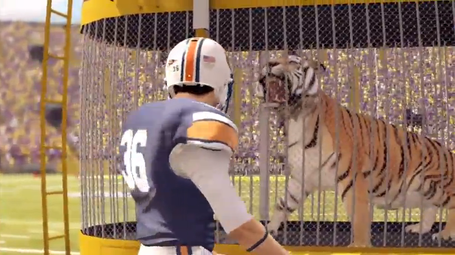 The previous mascot video also featured Uga snapping at an Auburn player, so I guess AU is the designated test subject for all newly introduced mascots.

For more on Mike The Tiger's powers of intimidation and all other LSU sports topics, join And The Valley Shook, SB Nation's LSU community.