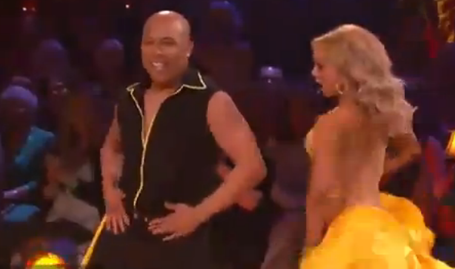 Georgia Bulldogs great Hines Ward and partner Kym Johnson posted their third-straight impressive Dancing With The Stars score in week three, earning a 25 from the judges for their samba to Earth Wind & Fire's "Fantasy." Pittsburgh Steelers colors everywhere kind of make Ward look like Shaka Smart. Been a long NFL offseason already, y'all.

Complete write-up of the show here, and here's a video of Ward's April 4 performance:

Ward's top competition for the night, Petra Nemcova, also scored a 25 for this waltz that mostly reminds me of Shawn Michaels' WrestleMania 25 entrance because one night of rasslin' has left me with a profoundly narrow frame of reference for the time being.

Previously, Ward finished third in week one and tied Jericho for the top score last week. Not going to go through all the math, but I'm pretty sure he's taken over as the show's highest-scoring competitor.