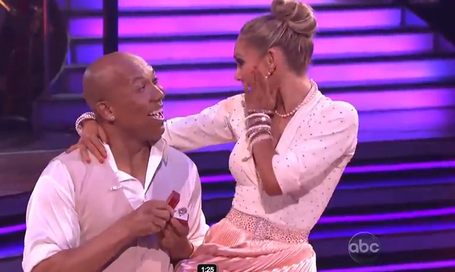 Hines Ward's run to the 2011 Dancing With The Stars title continues, with the former Georgia Bulldogs star posting the second-highest score on the Week 8 show. Only Chelsea Kane's results (54) surpassed Ward's (53), as Ralph Macchio's 46 puts him on the hot seat for Tuesday night's elimination show. Kirstie Alley scored a 53, while Master P's kid was close behind with a 52.

If those scores seem high, it's because each pair performed two dances this week. Here's video of Ward and Kym Johnson's foxtrot to a version of Natalie Cole's "This Will Be (An Everlasting Love)":

Ward tucked a ring into his vest pocked before the performance, then presented it to Johnson at the end. According to international dance rules, they are now married. How will this affect their chances of winning? Is Ward taking this competition seriously enough? Does this all count as minicamp? Did Washaun Ealey leave Georgia football to try out for the next DWTS season?