Dancing With The Stars Scores, Results: Perfect May 16 For Hines Ward

Share All sharing options for: Dancing With The Stars Scores, Results: Perfect May 16 For Hines Ward 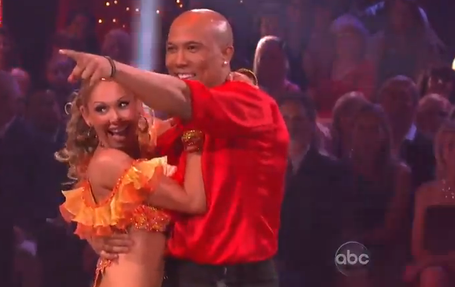 Sporting Georgia Bulldogs red and black for his salsa with partner Kym Johnson, who returned from a serious neck injury to compete, Hines Ward achieved the first two perfect scores of the 2011 Dancing With The Stars season Monday night. Team Chelsea Kane finished with the night's best result, however, having topped Ward for 15 points in a bonus round cha-cha competition.

Ralph Macchio could be gone after Tuesday night's elimination show, having produced the lowest score of the week, a 48. Kirstie Alley finished third with a 54. Those two were also the first two out of the cha-cha fest. I can't believe I'm typing all this.

Video of the pro-wrestling-maneuver-gone-horribly-wrong accident that hurt Johnson and their perfect tango -- featuring Johnson in a neck brace lamenting lost practice time #gully -- followed by video of that salsa: