Osama Bin Laden is dead, in case you haven't heard. College campuses across the United States are flooding with rowdy students celebrating the death of the Al-Qaeda boss, with ESPN's Scott Van Pelt functioning as the Twitter curant. Citizen journalists are sending him pics of their local flash mob parties, and he's dutifully retweeting them. His first from the SEC: the Rock, semi-official Tennessee Volunteers slogan host. 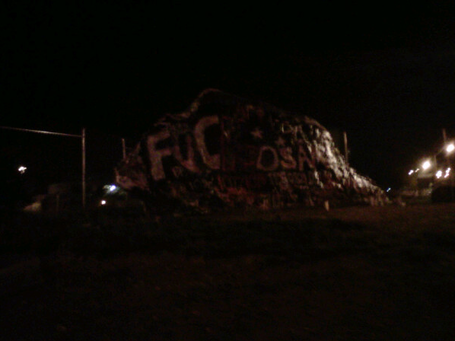 That stone has recently held bold comments on Lane Kiffin's exit, Bruce Pearl's firing and so on, but even as united as UT fans and students were on those two issues, this one has got to be even more consensus.

Georgia Bulldogs fans are also gathering near the Arch as the victory bell is ringing out. Of course, as our next post will demonstrate, the Alabama Crimson Tide are about to win this round.

For more on the Vols, join Rocky Top Talk.