Tradition Sports Online has leaked videos of NCAA Football 12's player ratings for SEC, ACC, Pac-12 and Big Ten teams -- complete rosters, too. At first glance the Georgia Bulldogs look to be a fun team to run the ball with -- until you realize two of their top four players will be removed from the game once forum types are finished updating the rosters.

Washaun Ealey, who transferred out, and Trinton Sturdivant, who suffered another horrible injury, are UGA's best non-specialists besides Aaron Murray. Drew Butler is, of course, Georgia's highest-rated player, while Murray is the SEC's best quarterback by four points -- Chris Reif of the Mississippi St. Bulldogs and Stephen Garcia of the South Carolina Gamecocks each earn an 88. The secondary should be solid, with both Bacarri Rambo and Brandon Boykin rated highly, but the rest of the defense has as many questions as its real-world counterpart.

Isaiah Crowell shows up as an 81. With Ealey out he'll be one of the team's fastest and strongest backs, though he's held back by his freshman-level awareness. (Pro tip: awareness doesn't really matter for quarterbacks and halfbacks, since you control them anyway. This is why you should always school your friends by drafting Pat White as your starter in the 36th round of your Madden fantasy draft.)

Here's a video of the complete SEC rosters, followed by a shot of the Dawgs top players, none of whom actually correlate to actual, current student-athletes, wink wink: 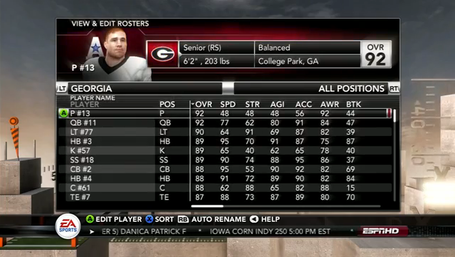