Paul Finebaum's Facebook page has three photos of Harvey Updyke's facial injuries after that still-unresolved April 20 incident after his initial court date, during which he claimed he'd been attacked at a gas station in Auburn Tigers country. Not many believed he was actually struck by anybody, but he definitely suffered some sort of damage from something (conclusive!).

I'm not sure when these photos were taken, but they look to have been snapped shortly afterward. Here's one of the pics, which shows a pair of scratches on his forehead and a blackened left eye: 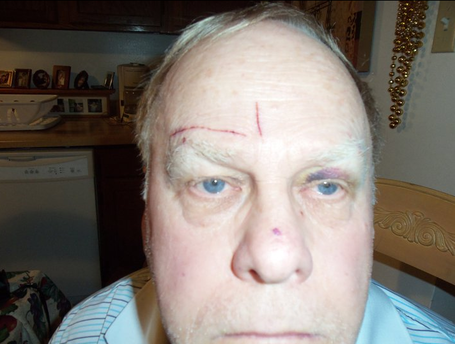 Updyke has been through a lot, not that he hasn't brought it upon himself one way or another. You're looking at a man who may not have been consistently squared with reality for quite some time. It's not fun at all to look at.