Share All sharing options for: NCAA 12 Player Ratings: Wreckbone Offense Likely Harder Than Ever This Year

NCAA Football 12 is coming out soon. You care about player ratings, whether you want to or not. Head to Tradition Sports Online for complete Big Ten and Pac-12 rosters, in addition to the SEC and ACC roster videos here.

The Georgia Tech Yellow Jackets are expected to follow a disappointing season with another struggly affair, and EA Sports seems to agree with that assessment. The team's highest-rated player is Orwin Smith, who produced 711 yards from scrimmage in 2010. Likely starting QB Tevin Washington is rated a 81, well behind conference leader Russell Wilson -- a 92 who'll need to be moved to Wisconsin. And other than featuring 87-rated LB Julian Burnett, Tech's defense is going to be a pain to play with.

Whoever made the ACC video skipped both the Florida St. Seminoles and North Carolina Tar Heels, perhaps the conference's two most interesting teams. FSU will actually be a national contender, while UNC's roster will likely include the conference's top player, DE Quinton Coples.

(SIDE NOTE: One thing I really like about these ratings is I haven't been able to find any players other than Andrew Luck, LaMichael James and Dont'a Hightower rated in the upper-90s. Having a player rated 97 or better should be a very, very rare treat.) 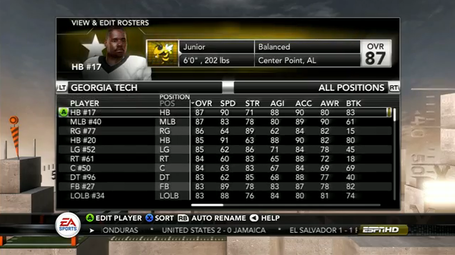