Share All sharing options for: PHOTO: Boise State Blue Turf Hat, Coming Soon To A Georgia Dome Near You

One fanbase hails from the Southeastern United States, the other from darn-near Canada. Quick: which of the two is more likely to produce a ballcap featuring steamin'-mad, anthropomorphic lawncare? Nine times out of 10, you'd think of your lake-person neighbor whose lawn is as crisp as his khaki shorts, which are crisp. Lake people smell like lakes.

Your only cause for doubt: you have seen this Boise St. Broncos blue turf hat, yet you don't quite believe it's real: 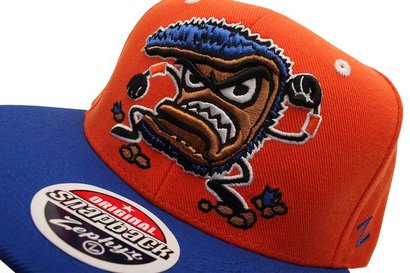 Every populace on earth has rednecks all its own, and that's a proverb you should never forget. For all the differences between Georgia Bulldogs fans and their Chick-fil-A game opponents, there might be just as many similarities. More than one SEC fan who's actually made the journey to Idaho has judged Bronco Nation worthy of Dixie's respect, despite the wide-eyed zealotry of certain BSU Internet representatives.

If absolutely nothing else, remember this is a program that was defined for several years by its yardwork. Picture tiny patches of blue grass riding high around Atlanta in September, and you'll realize Boise State has a little bit more Peach State in it than either side would like to admit.