Update: We've got a pretty good idea of the real thing right here, along with a terrible mockup.

This first image has bounced around the Georgia Bulldogs blogosphere this morning, with some wondering whether it might represent the Nike Pro Combat uniforms the team will wear against the Boise St. Broncos in Week One. It definitely does not, but the one after it just might doesn't either.

It comes from a Flickr collection titled "Pro Combat Concepts," meaning it was created either for fun or for the creator's portfolio. It also is based on a template from a previous year's Pro Combat imagery -- Nike will definitely switch up poses for these things from year to year.

Here's the other one that could actually be the real thing (Update: it's not, as it's actually been making the rounds since last year, though TinEye didn't turn up a thing earlier [ht SicEmDawgs.com]*) -- yes, you will probably recoil with disgust: 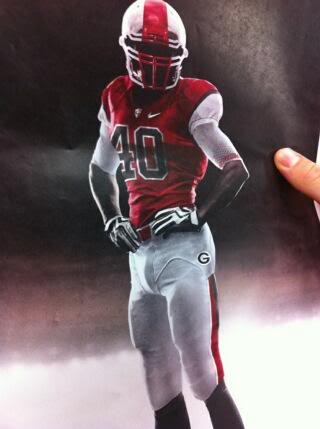 Saturday Down South shared that one, saying it came from a message board, though they didn't cite the source. If you know the site it came from, drop it in our comments.

I don't know if this is real or not -- though it does reflect some of the more extreme rumors that have made their way around -- but I f------ love it. That huge stripe of warrior blood extending into the face mask is something I've never seen before. TCU should've done it first. There's the risk the whole thing could look clownish, but clowns are pretty terrifying too.

* Also Via SicEmDawgs.com, here's one dug up by From Hedges To Hardwood (there's another version of this one without the black outline on the numbers and with a black face mask). As far as I know, nobody has specifically debunked this one yet: 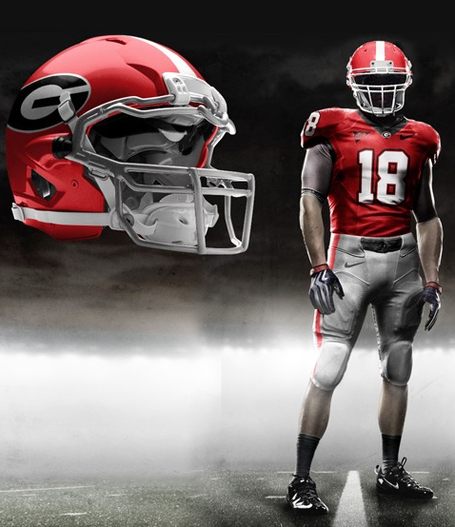