The Georgia Bulldogs are only going to have three true road games this year, four if you count their trip to Bobby Dodd Stadium. That neutral-ground opener against the Boise St. Broncos in Atlanta, which was supposed to feature 40,000 tickets for UGA fans? Make that 53,000 and then some.

Via SicEmDawgs.com, a look at what the Georgia Dome will look like on the evening of Sept. 3: 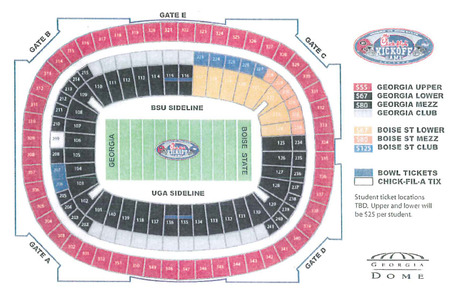 The Broncos game against the Virginia Tech Hokies last year produced about 10,000 Boise State fans, filling up about 11 percent of FedEx Field. If they're able to exceed their 7,500-ticket allotment, as they did last year, they'll own about 14 percent of the Dome.

Of course, that's leaving aside the fact that Georgia fans typically attend games in greater numbers than do Hokies fans due to being a larger and older school with a wider fanbase and longer football tradition, so it may all even out.

I trust we'll greet our distant neighbors with a hearty "Welcome to Atlanta!" and all, but it wouldn't be all that easy to spot very many of them if they didn't insist on wearing that color scheme.