The Georgia Bulldogs all-red Nike Pro Combat uniforms were supposed to be revealed on the program's Facebook page later today, but it looks like we have ourselves a glimpse of then anyway via Nike.com. These appear to be the first uniforms of any participating team Nike is unveiling this season, as there aren't any others up yet. 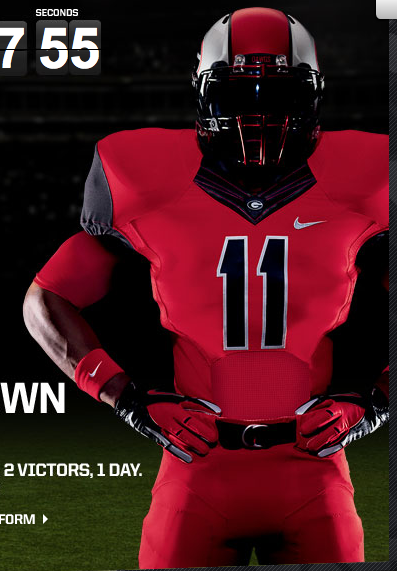 Clicking the link below the image doesn't lead to any further pics or insights, but it does produce this text:

The Georgia Bulldogs are ready to jump all over the 2011 season in their new Nike Pro Combat uniforms. The red and black represents their ruthless style of play, and the silver is a nod to their last national championship season.

The Dawgs will unveil the power, pride and ferocity of their new unis this Labor Day weekend, as they open their season against Boise State.

That color scheme matches what former volleyball player Maria Taylor shared, though the whole thing lacks the rumored dog bone pattern. The people wanted dog bone pattern! The massive red helmet stripe from the aborted 2010 Pro Combat uniforms returns, and it sort of looks like it still extends onto the face mask itself, but it's dark. I loved that part.

What do you think? You probably hate it.